The Story Behind the Characters

The Story Behind the Characters in 2024: A History of the Future

I thought I would do a little back story on some of the characters, starting with my first book, 2024: A History of the Future, just to hint at where they have come from. I am starting with Francine L’Amour, the tough and hardened French leader of the British resistance underground movement.

He had sandy hair and a smile that whipped Francine into a frenzy.

Later that night he told her the same. For him it was her deep brown curls.

But his French was terrible, causing her to laugh as she traced her long fingers over his body.

They were married that summer, when school was out. She was seventeen. Brian was twenty-one.

She left Bordeaux for the first time, went with her husband to Exeter. They took everything they had in two backpacks and a single suitcase with a broken wheel.

There was a lot she did not like about England; not just the warm rain, but the cold people and the damp rooms they rented above a bicycle shop. They cleaned the shop below twice a week. In return they could have use of two bicycles whenever they wanted.

One weekend they rode to the abbey at Buckfast and drank wine with the monks, closeted in the little bar they had for special guests. They were special because Brian’s brother was a monk there. But they seemed special anyway, because they were young and in love.

And they were happy.

But the world around them was not. It was changing; forcing change upon them.

It was fun at first to go to the protests, to be marching with the others, to have some purpose in this crazy world. But then it got earnest. Brian spoke at rallies and organised demonstrations, neatly planning the maximum embarrassment for the authorities that leant on them, trying to crush the life out of their rebellion.

One day Brian said they were to form a new protest group. It was to be an artful one that achieved mighty aims by careful planning and stealth. They argued long and hard as to its name, finally deciding on the Spiders. They would weave their webs and trap the authorities. Then there would be freedom again.

Francine was sad to see her Brian shared with so many others. But she reasoned best to have most of him than none of him and she loved him again for what he was.

The shot came ringing down the London street. The sound seemed to charge ahead of the bullet, seeking where to do maximum damage.

She knew it would hit her husband as soon as she heard the crack.

She had to be grateful for small mercies for they did not arrest Brian; not that night in the hospital or the next day or the day after.

What would they do, after all, in arresting a cripple? Other than to promote a martyr, of course.

After six weeks, Francine took Brian home to his parents. He was a different man to the one she had fallen in love with in her home town in Bordeaux. Only his mother could manage the mood swings from morose to violent. Francine tried to be his carer but could not do it. She delivered him to his parents on a Friday, spent the weekend in one final effort that failed.

“You must go” Brian’s mother said.

“Go”, his father repeated, “go and fight in his place.”

“I’ll do that”, she replied, “for I know he is in the best hands. But know that I will be back for him as soon as we’ve secured independence for my adopted country.”

On Monday, she used her maiden name to join the Spiders. She did not want favour for her connections, nor pity to push her along.

Within a year, Francine L’Amour was running the resistance with a determination that combined with courage and flair to produce a leader that everyone loved to love.

Except Brian, who could love no more but, nevertheless, waited patiently for that someone in his life to come back.

After all, she had said she would one day.

You can find my novel, ‘2024: A history of the Future’ on Amazon by clicking here. 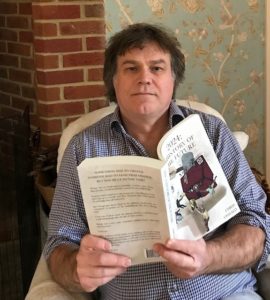 Chris Oswald is British Author based in Dorset, England. In this article he talks of his Brexit-inspired Novel ‘2024: A History of the Future’, but he has also published a second novel titled ’18 Acres Of England’ and has written a third book, ‘The Stuff of Heroes’, which is due to be released this Autumn.